The D&O Diary’s Asia Pacific mission continued at the end of last week with a stop in Sydney, for the meetings that were the primary reason for my Asia Pacific trip.  I have been to Sydney several times now, but the city has lost none of its charm for me. If anything, I think I appreciate Australia’s largest city more each time I visit.

The most important reason for my visit to Sydney was to participate as a panelist at the DLA Piper law firm’s Insurance Symposium. The topic of my presentation was “The Future of D&O Claims.” The turnout for the event was impressive – perhaps even more so because the weather on the afternoon of the event was absolutely gorgeous. As shown in the first picture below, the reception after the event was held on the law firm’s rooftop terrace. An outdoor reception is a great thing to be able to do in February. I would like to thank my hosts DLA Piper for inviting me to their event, which was excellent. In the picture below, I am standing with David Leggatt of DLA Piper’s Melbourne office. David was one of the event’s moderators. In this picture, I am standing with Jane Pochon of AIG and Natalie Stojanovich of DLA Piper’s Melbourne office.  Readers may recall that Jane attended the recent PLUS D&O Symposium in New York as a scholarship recipient from the Australian Professional Indemnity Group (APIG), the Australian counterpart to PLUS. It was great seeing Jane back in Sydney after having just met her in New York a few days before. I saw many other familiar faces at the event, but I also made some new friends as well. In the picture below, I am standing with Lea Hasapis of Allianz Australia Insurance Ltd. and Ruth Parker of AGCS Pacific. Ruth confessed that she is a huge fan of The D&O Diary. She didn’t believe me when I told her that I would publish her picture on my blog. Well, Ruth, here you go. On my final day in Sydney, after my last morning meetings, I took a ferry to the Manly Wharf. I had been to Manly during my last visit to Sydney, but I hadn’t had a chance to explore the Sydney Harbor National Park, which covers the end of the peninsula that forms the North Head (the northern entrance to Sydney harbor) and which is accessible from Manly. The weather for my excursion started out hazy, hot, and humid, but while I was walking, the skies cleared and I enjoyed sunshine for most of the rest of the time. Once I made my way away from the wharf landing, I was soon hiking through some thick brush. There were occasional spectacular views, particularly on the Pacific Ocean side of the peninsula. I encountered some of the interesting local inhabitants while hiking through the brush. First, I encountered this lizard, near Collins beach. Later I observed another lizard, on the ocean walk closer to Manly. These lizards are not just any reptiles; they are Eastern Water Dragons. It is hard to tell the scale from the pictures, but I would say the first two were about a foot long. The third Water Dragon  (third picture below) was quite a bit longer. Including his tail, I would say he was close to two feet long. 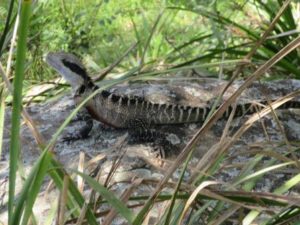 It is important to pay close attention while walking in the brush and not to let your mind wander. As I was walking along lost in thought, I almost walked right into these two beauties’ web, which was built directly across the footpath. You can’t really tell from the picture, but these impressive specimens were big. The leg span of the upper one was about the size of a deck of cards. The lower one was slightly smaller. I am very happy to have not made an even closer encounter with them. I included an extra picture of the larger spider below, because, well, it was a really impressive spider. As I returned to Manly, I walked along the  Cabbage Bay Aquatic Preserve  (first picture below) before making my way back to Manly Beach itself (second picture below). As I looked at all the happy people enjoying a sunny afternoon on the beach, I thought to myself – dude, it is February.