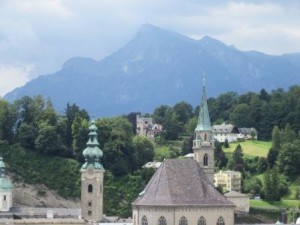 The D&O Diary was on assignment in Europe this past week for meetings in Germany, with a brief stopover in Austria before returning home. The picture to the left was taken during our short visit to Salzburg, Austria, which is described below. The trip’s main event was a series of meetings in Munich with industry colleagues at Munich Re. The company’s beautiful Munich headquarters building on Königinstraße, opposite the main entrance of the Englischer Garten, is pictured below. I would like to thank all of my friends at Munich Re for the opportunity to meet with them, and in particular I would like to thank my host Ina Ebert, as well as my good friend Helga Munger, for arranging such a productive and enjoyable visit to the company and to Munich itself.

Prior to this visit, I was unaware that in July, Germany experiences monsoon rains. Or at least it did throughout the entire time we were in the country. The entire duration of our visit involved drenching downpours that swamped our brief visit to the lakeside village of Herrsching am Amersee, as well as our stay in Munich. The rains followed us to Salzburg as well, although there were enough breaks between downpours to allow us a few brief interludes to take in the local sights. The historic city, best known as Mozart’s birthplace, is located on the Salzach river, where it squeezes between twin hills of the Mönchsberg and Kapuzinerberg. On a separate steep hill  (the Festungsberg) overlooking the city’s historic center is the Festung Hohensalzburg, an impressive military fortress that affords great view of the Alps beyond. The Festung, which was built by the district’s Prince-Archbishops to protect the city, was never taken in battle, although the locals did surrender the fortress without a fight to Napoleon in 1800 after the regnant Prince-Archbishop fled to Vienna. Despite the wet weather, we managed to hike about the hillsides surrounding the city, including a memorable afternoon climb up along the old city walls along the rugged side of Kapuzinerberg.  As we scrambled to the summit, weary and drenched in sweat, we discovered that a road climbed the hill’s back side, leading to a café at the top. The high point to our Salzburg visit was an evening concert in the Marble Room at the Schloss Mirabell (shown below), the beautiful palace of the Prince Archbishops that ruled the city. The intimate setting proved to be a great venue for the musical performance. During the string sextet’s performance of the Summer Concerto from Vivaldi’s Four Seasons, the violin soloist’s bow came apart, leaving him with only a loose tatter of horsehair, with which he pantomimed playing until, with smiles all around, he managed to procure a replacement bow. The ensemble completed the performance without further incident. We left Salzburg amid yet another downpour, but fortunately that was the last of the rain for the remainder of our trip. By the time our train reached Vienna, the sun had started to break through, and we enjoyed warm sunshine for the rest of the trip. These days, Vienna is a large, busy, modern city, but much of the Imperial architecture from the Habsburg era remains. I have to say that amidst the warm, July sunshine that bathed the city while we toured its historic buildings, strolled through its many green parks, and walked along its famous river, we pretty much fell in love with the place. Of course, we visited all of the most famous Imperial buildings, including the Hofburg Palace, the massive, rambling palace at the city’s center that served as the Habsburg’s base of operations, and that still serves as the official residence and workplace of Austria’s President.  The Neue Burg section of the palace is pictured to the left. The older Amaliaburg section of the palace is pictured below. We also visited the Belvedere, which had been built on a hilltop away from the city center by Prince Eugene of Savoy and which was the home of the Archduke Franz Ferdinand before he was assassinated in Sarajevo (sparking the First World War). We also spent the better part of a day at the Schloss Schönbrunn, Marie Theresa’s magnificent  summer palace. When built, the palace was far outside the city, though now it is just a few U-Bahn stops from the city center.  Emperor Franz Joseph was born there, and he died there after his long reign, during World War I. The smaller Gloriette palace sits on a hilltop above Schönbrunn, affording fantastic views of the palace and gardens below, as well as of the city beyond. On a warm summer afternoon, the palace grounds were fully of squadrons of happy tourists, taking selfies in the beautiful gardens. In addition to seeing these historic buildings, I also had the chance to fulfill one of my lifetime ambitions – I have always wanted to see the Danube. What I learned in Vienna is that at least the Vienna section of the river has been canalized and channeled as part of a flood control engineering program, so while the famous river definitely runs through the city, it does not afford quite the impression I had anticipated. Even a little more surprising is that, while there are nice enough parks along the river and the canal channels, the city really is not oriented toward the river in the way that, say, Paris and London are to their respective rivers. Both the current city center and its historic district are some distance from the river. So while I was happy to finally get to see the famous Danube, the experience was not quite what I had hoped for. We also saw a musical performance in Vienna as well. The concert, which also featured a small string orchestra, took place at the Karlskirche, a baroque cathedral that provided a much more formal atmosphere than the music venue we had visited while in Salzburg. The church’s vast ceiling vault made for some dramatic sonic effects, particularly during the soprano soloist’s rendition of the Lacrimosa from Mozart’s Requiem. It was still full daylight when we entered the church, but it was dusk when we left, with the church and the adjacent plaza bathed in a beautiful evening light. But as much as we enjoyed seeing the city’s historic buildings and famous river, it was the city’s many beautiful parks that won us over. I never got a chance to do the backpacking-through-Europe thing when I was younger, but we made up for that a little bit on this trip. Every evening during our visit, instead of going to a restaurant, we packed up a picnic dinner and spent the evening with a bottle of wine sitting on the lawn at one of the parks, enjoying the warm evening as the day turned to dusk. Invariably we were at least double the age of everyone else in the park. One of the city’s famous parks, the Burgarten, was just a short few steps from our hotel. One evening while we were there we sat on the lawn near a large group of twentysomethings, who, it appeared, had gathered to celebrate the birthday of one of the young men. The birthday celebrant wore a paper crown. As the evening darkness gathered and the wine disappeared, the strict spatial divisions that initially had separated the various groups on the lawn began to dissolve. The crowned young man brought us some birthday cake, and we applauded their various juggling acts and impromptu dances. As we were leaving the park to go back to our hotel , we waved goodbye to the group, and they all waved back energetically. You could almost hear them saying “Goodbye old people! Safe travels back to the United States! Or maybe Canada, who knows, it is so hard to tell sometimes!”

It was hard to say goodbye to Vienna, a great place to visit. In the cab on our way to the airport, we were already talking about what we would do the next time we visit.

The view from the Festung Hohensalzburg, Salzburg Say you stumbled up a rugged hillside, arriving at the top drenched in sweat, only to discover that there is a roadway up the hill’s backside that leads to a cafe at the top. What do you do next? Well… Inside the Kunsthistoriches Museum in Vienna, in front of Pieter Brueghal the Elder’s The Tower of Babel The State Hall in the National Library in Vienna